It's summer vacation here and I'm officially going crazy! The kids are all over the place and I can't get a moment's peace (well, except at bedtime and maybe during naps). I just thought that I'd be relaxed and have time to refresh and plan for the coming year, but let me tell you that that is NOT as easy as it sounds. With a 1 year old and 5 year old who NEVER stop moving or talking, I'm just drained at the end of the day! So, finding fun things to do during the week is a must otherwise they drive me nuts! This past week we went to Green Lakes State Park beach and then out with friends later in the week for a photo shoot at what was supposed to be a sunflower field. More on that later. First, I took the kids and all our beach toys, snacks, blanket, and other stuff to the beach. Now, we are landlocked here in Central New York but we have a handfull of lake beaches around. Not too bad if you really want sand and water to play in. The sand is more like sandy mud around here though. At least at Green Lakes it is. But it's family friendly and a diversion. Here are some photo highlights from our couple hour trip.... 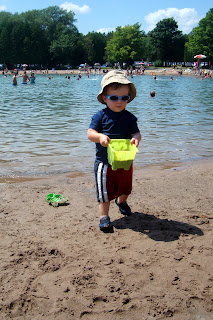 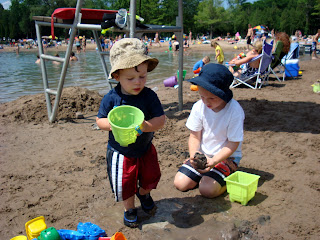 Busy making sand holes and piles... or is that sand-mud? 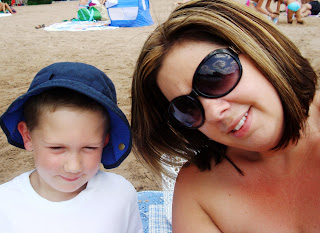 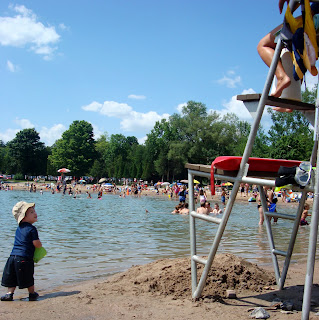 Fascinated by the lifeguards and lifeguard stand! 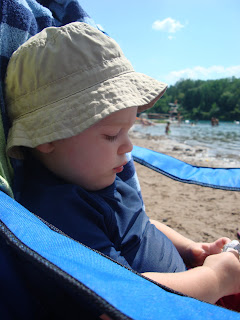 Cute boy sitting for 2 seconds eating blueberries (before he got up and dumped them on the sand and proceeded to eat them before I could catch him! YUCK!)

It was fun but exhausting for everyone! We stayed 2 hours and I mostly ran after Christopher when he decided that he'd rather have everyone else's toys or blanket. I brought tons of snacks and he and Mark ate them ALL! Hungry boys! So, we headed back to the car after much fussing and changed. I thought Christopher would lose his diaper it was soooo swelled up from the water. I had forgotten the water diapers and I don't think they work anyways! On our way home, he fell asleep! Mark was pretty good and loves any and all water and sand that he can find!

The next outing was with my good friends and their kids. We were going to go get pics taken with the kids at a sunflower field. But when we got there, Nic realized that they didn't plant sunflowers this year, but CORN!!! Darn! We still had the kids get out and run around. It was pretty there by this little pond in Camillus. Lots of neat trees and cool rocks that were on the hill around the parking lot. From the middle of the hill looking up, you could see the sky. Nic brought a pretty pink chair for her little girl and Holly's little one to pose on, but mostly my boys thought it was fun to sit on it. 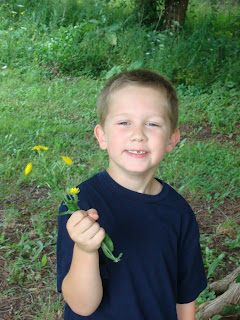 Mommy, there are sunflowers here! See??? 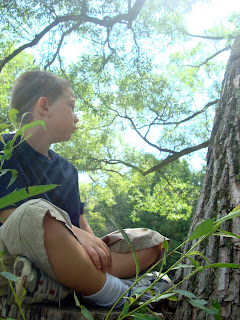 Mark was obsessed with climbing trees! My monkey boy... here is one of my favorite photos of him! 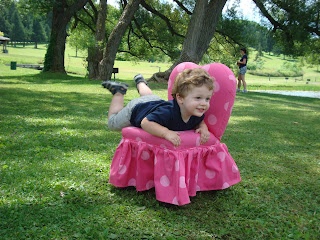 Here's the chair! Christopher looks so cute on it! 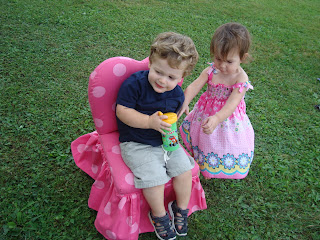 Frankie just wanted his cup but they do look cute together! 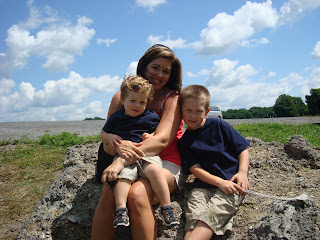 Here we all are on the rock... I have to edit the car on Mark's shoulder and the rope he was carrying around. But all in all it's a good one! Love that sky behind us! Douglas took this photo!

Okay, naptime is done and I guess I better go get the kid up before he screams his head off! I hate to say it... but I'm soooooo ready for school to start again!
Posted by Jennifer Matott (Sigmagirl) at 8:59 AM

I love the clouds behind you all too in that last shot!

You sure have been keeping busy with those kiddos this summer! You'll need to go back to teaching for a vacation, lol!

Jennifer Matott (Sigmagirl)
Central New York, United States
I'm a Mom, daughter, sister, friend, teacher, artist, scrapper, shopper, and wife. I'm sure there are many other things I am, but these are the ones that most define me.