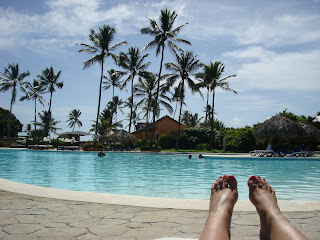 Just back from our vacation to the Dominican Republic. Before I get into the long story of our trip, I thought I'd reveal my winner from the Scrap That Baby blog hop! I randomly chose:

Lovely layout Jen!! I'm dying to get my hands on that Nikki Sivils paper!!!

It's kind of funny, her last name is "Summer"... perfect! I'm dying to GIVE you some Nikki Sivils papers girlie! Just email me with your addy and I'll get those out to you! Thank you all who left comments here! You were so sweet!Okay, about our trip...I have to say that it was relaxing after we got there and adjusted to the heat, humidity, and kidless atmosphere. Lots of drinks, naps, and pool time was enjoyed. We met a few nice American couples to hang with at the pool bar. Mostly the language spoken around the resort was Spanish and Russian. There were so many Russians there. It was a mix of European and Spanish. Everywhere we looked there were thong bathing suits and cigarettes being smoked. The food was not stellar, the room was outdated and old, but clean. The air was sticky and everytime you stepped out of your air conditioned room, you immediately were sweating! But beyond the negatives, it was relaxing. We enjoyed the adult conversation and drinks. We slept in, ate when we wanted, dressing in swimwear and flip flops during the day and I got dressed up at night. Nice! The weather was hot and sunny! It only rained 2 nights and the day we left. I got a killer tan! Matt burned and is peeling now... LOL... Irish boy!

I also must mention our horrific travel back. This is the main reason that I will NEVER EVER go back to the Dominican Republic. The airport is slow as molasses and very disorganized! We got to the airport on time with actually hours to spare. We noticed that the flight to Philly (which was the only other US Airways flight out that day) was late in boarding. We went through security and their computers were down due to a power outage that afternoon. SO, they had to handwrite our boarding passes. Weird! The checked our passports twice before we got the gate. We waited and Matt was a wreck because it looked like the Philly flight was not leaving on time. We had only a 1 1/2 hour layover in Charlotte to get through customs, security, get boarding passes for the 2nd half of our trip and get something to eat. Not looking good. So, after 2 hours, they still hadn't departed the gate. Our plane was waiting on the Arrival side to move. So after a handful of people (including my hubby) asking them to move gates and board us, they finally decided to bus us over to the arrival side where the plane was. DUH! We got there and they checked our passports and boarding passes as we were to board. They hadn't loaded the luggage yet either... WTH??? Apparently time means nothing to them. BUT we had a connecting flight to worry about. They boarded us and we waited on the plane for over an hour before someone came on and let us know that there was a problem with some passengers passport information. Apparently they needed to double check over 24 people! So, a Dominican worker came on with a cell phone and reflective vest and was talking rapid spanish to whoever was in charge on the other end. He bounced for person to person with no order or timeliness. It was maddening! 4 hours later, we got the word that they were cancelling the flight due to not being able to get the Charlotte in time to met Customs. Meaning we would be stuck on the plane unable to deplane until morning. So, we deboarded and got our luggage and were placed on big busses to be put up in a Dominican hotel. No one knew what was going on. It was scary and frustrating! Matt and I were wrecks and HUNGRY! So, finally we got the information that we were being put up in an all inclusive overnight and had to meet the busses at 7am the next morning to do this all over again. Hopefully with more organization! After checking in and getting settled, we went to a buffet to eat at 10pm! Because I was so cramped up from sitting so long, I decided to go swimming after to stretch out. Nice! It was a warm night and perfect. The room SUCKED! It smelled moldy and old, but there was AC and a bed. My neck was stiff from the hard bed, but it was okay. We boarded the bus and got to the airport. They told us to eat because we may not have food on the plane... it's a 3 hour flight. So, we ate Wendy's food for breakfast.. LOL! We left an hour late, but we had real boarding passes and a connecting flight at 4:30pm. So, we had plenty of time. I was so tired and miserable... I just wanted to get home at that point.All the relaxation and enjoyment w as sucked out of me after a horrible night. NEVER going to go there again! I think I may not go out of the country for a long while! TOo much work to be going through all this nonsense. We got home and got lots of wonderful hugs and kisses from the boys! We missed them so much but it was soooooo good to get home and I am so thankful to have such wonderful parents to take the boys and keep them safe for us! LOVE YOU SO MUCH MOM AND DAD!!! I can't thank them enough! I love the USA too! It's crazy to deal with 3rd world country issues! NO thank you! So I am home and getting ready to go back to school.

So, here are some photos of our trip. I didn't take as many as I wanted because we were relaxing and I was lazy!Tee hee... 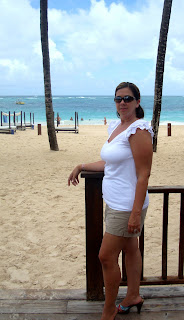 Me posing in front of the beach. 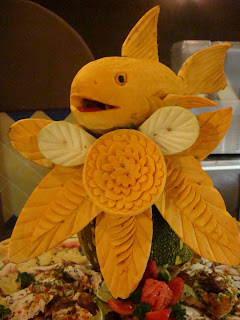 They had elaborate carvings from squash and melons around the buffet each day. So cool! 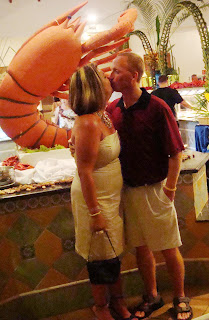 The waiter took a photo of us at the buffet one night. 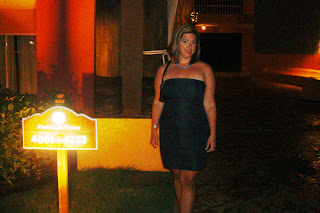 All dressed up one night in front of our building. 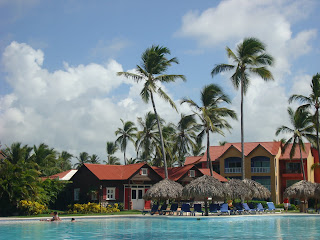 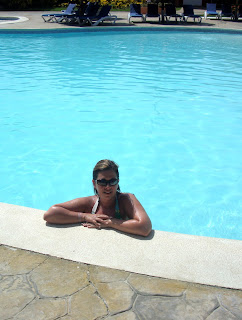 One of the days in the pool. 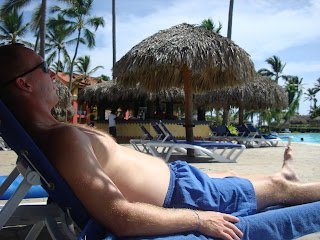 Matt relaxing under the thatched hut. 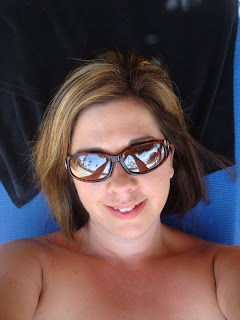 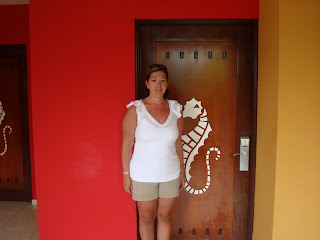 Gotta love those doors. So cute!
Posted by Jennifer Matott (Sigmagirl) at 9:31 AM

Jen - you look great! I'm jealous of your getaway vacation. Maybe in a few years we can get away. Have a good week.

Finally got around to checking out your blog and read your airport horror story - reminds me of a trip to Jamaica I took almost 30 years ago, with a boyfriend (who I never saw again afterward, the extra day in Jamaica was soooo awful)!
Anyhow - I wanted to let you know I left a response to your comment on my blog.
By the way, my hubby is watching TV - is there any way to turn off the music on your blog? It keeps getting louder and won't shut off... and I'm getting dirty looks from the other side of the couch!

Jennifer Matott (Sigmagirl)
Central New York, United States
I'm a Mom, daughter, sister, friend, teacher, artist, scrapper, shopper, and wife. I'm sure there are many other things I am, but these are the ones that most define me.